East Bengal Football Club is a Kolkata based club, among one of the big three, the others being Mohamadden and Mohun Bagan. They have a huge rivalry with the other two teams in Kolkata and have a faithful fan following. East Bengal website - East Bengal

Today's Match report - Khan Thang Paita 82nd minute strike helped Kingfisher East Bengal defeat Prayag United SC 2-1 in the second semifinal of the Federation Cup, at the Salt Lake Stadium in Kolkata. It was an Red and Gold brigade third successive entry in the Federation Cup Final. Alan Gow in the 37th minute and Paita in 82nd minute scored for the East Bengal while Snehasish Datta scored for Prayag in 16th minute.- aiff

It has been great to watch these matches so far, hailing from Mizoram it's good to see Mizo youth playing in big teams, yesterday I watched 4 Mizo guys playing for Shillong Lajong and today there were two of them, Malsawmtluanga playing for Prayag United as striker and Robert Lalthlamuana as defender for East Bengal. I felt the referee was not to fair in awarding the two penalties for Prayag United but I think those of you who saw the replays on TV will know better.

I also find it weird that some teams are being named after the sponsers, for Instance Prayag is the name of a company, there are a few other Football clubs with names of sponsor as the name of the club, some of them are Palian, HALL, ONGC, BEML & Air India,  I find it hard for me that someone would support a club named Air India, instead, why don't the sponsor follow the route of other clubs with passionate followers like East Bengal and Shillong Lajong where the name of the team is named after a geographical area and hence the fan following form that area. Air India for instance could instead name itself Delhi FC and sponsor the team instead of naming the Club Air India.


Find below a few of the pictures I took today:

1.Crowds cheer as the teams move in

I today watched Salgaokar beat Shillong Lajong 1-0 to reach the final of the of the 33rd Federation Cup. They defeated their bitter rival in a first semifinal match played at the Salt Lake Stadium in Kolkata. The solitary goal of the match was scored by the Goan striker Chidi Edeh in the injury time. - AIFF

Detailed report of the match at Goal.com

I basically came to support Shillong Lajong Team - A team established in 1983 in Shillong, Meghalaya  In the local Khasi language Lajong translates to “our own”. Headquartered in Shillong, a.k.a. “The Scotland of the East”, Lajong has access to the largest student population in the North-East and hence the football talent right from a young age. Lajong is under professional management and has a strong fan base across the North-East, which is being actively developed. There were a lot of northeast fans in the stadium today. Below are a few of the pictures that I have taken today, enjoy.- SLFC Team website 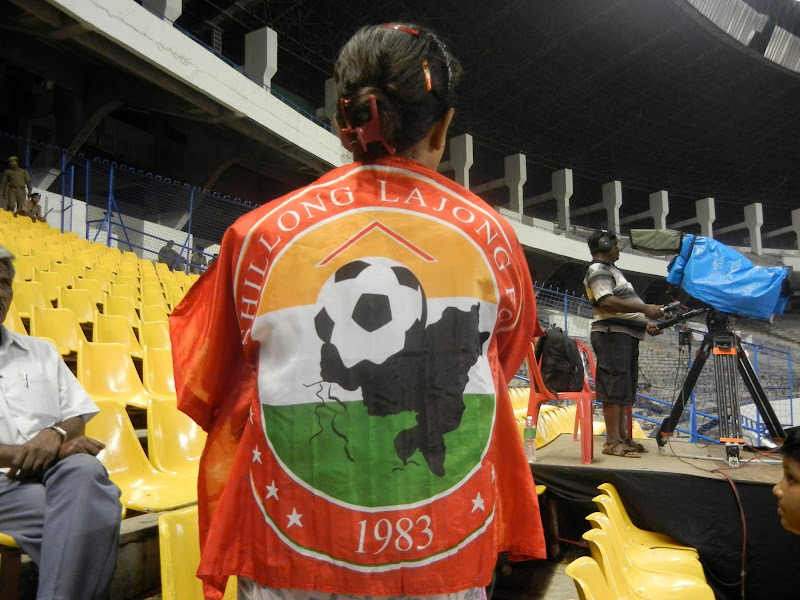 Moral Education is the need of the hour in India not Lok Pal Bill
I write this article in response to the movement of India Against Corruption,  while I do support in principle Anna Hazare’s movement against corruption, I do not believe a single legislative act will change much of the corruption that is happening in India.  In this article, I will be sharing a few of my experiences from living in different parts of India and my visit to other countries.

There is a feeling of resigned distaste of corruption that is happening in India, it’s rampant everywhere, the Politicians, the bureaucrats and  and police forces having a large part of the blame.  Recently, the assets of the Cabinet ministers of India was show, compared to their assets 5 years ago,  most of them had a unbelievable growth rate of assets of from 200% to 700%, the same kind of growth rate of wealth also happens among the different legislative assemblies of the country.  But I would not blame it only the politicians but what I feel is needed is moral education of students from schools onwards.

Read more »
Posted by Tluanga at 7:52 PM No comments: Links to this post

I visited today   largest stadium in the Indian sub-continent. It is currently used for football matches and athletics. The stadium was built in 1984 and holds 120,000  people in a three-tier configuration. The grass area is astroturf. The tract around is synthetic.

Today's match results - Kingfisher East Bengal scraped past Dempo SC one-nil to advance to the semifinal of the 33rd Federation Cup at the Sale Lake Stadium. Striker Robin Singh made the difference between the two teams in the 68th minute. The Red-and-Gold finished their engagements with seven points from three matches while Dempo stayed on three points from three matches.- AIFF


A few of my observations of the stadium: - It was huge, well lighted and impressive, on the other hand I found out that most of the restrooms were not working well except for urination, lots of stray dogs inside the stadium, crowds peeing behind the stadium, ball boys peeing near the synthetic track was not very impressive either. But you could have a good view from all around the stadium. Below are a few of the photos of the stadium.

Read more »
Posted by Tluanga at 2:06 AM 2 comments: Links to this post